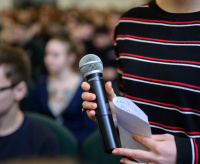 Rector Meets With Students
On January 24, MSLU Rector Irina Kraeva hosted a two-hour long “Rector Chat”, a new format of dialogue with students, in the University Assembly Hall. About 150 students turned out for the event,  prepared with questions and interested in the answers.

UN’s Words of Praise for MSLU Professor
Mr. Sergey Kochetkov, Chief of the Interpretation Service of the Department for General Assembly and Conference Management of the United Nations, has sent a letter of appreciation to Dr. Olga Yevtushenko, professor of the Russian language department at MSLU for her contribution to advanced training of the staff of the Russian Interpretation Section of the UN Secretariat. 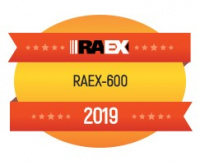 MSLU in the Top 10 Universities That Excel in Humanities
The RAEX ranking agency has evaluated Russian universities that offer programmes in
Humanities, with MSLU ranking fifth in the TOP 10 schools for humanities and in the top 100
universities in the country.

On December 13, MSLU's Academic Council held an extraordinary meeting to confer the  Degree of MSLU Doctor Honoris Causa on Kevin Quirk, President of the International Federation of Translators (FIT) and present him with an MSLU's academic gown.

Maltese Ambassador Gives a Lecture at MSLU
On November 20, Mr. Pierre Clive Agius, Ambassador Extraordinary and
Plenipotentiary of the Republic of Malta to the Russian Federation, was invited
by MSLU to deliver a lecture on “The Role of Malta in International Relations”.

On November 9 and 10, MSLU took part in the 50th Moscow International
Exhibition "Education and Careers" which was held in the Gostiny Dvor
Exhibition Center.

MSLU among Top Ranking Universities of the World.
On September 19, 2019, the Three University Missions Moscow International
University Ranking (MosIUR, or the Moscow ranking) released a list of top 1,200
universities in the world, with MSLU ranking within the 801-900 band.

Busan Delegation Visits MSLU
On July 31, MSLU hosted a delegation of the Busan University of Foreign Languages (BUFS),
the Republic of Korea, headed by its president, Dr. Chun Kiyeon. They met with MSLU
authorities, including MSLU Rector Irina A. Kraeva.

Malta’s Ambassador Visits MSLU
On July 23, 2019, MSLU Rector Irina A. Kraeva had a meeting with Ambassador
Extraordinary and Plenipotentiary of the Republic of Malta to the Russian
Federation Mr. Pierre Clive Agius.

Cuban Embassy Delegation Visit To MSLU
On July 10, 2019, MSLU Rector Irina Kraeva had a meeting with Counsellor of the Embassy of Cuba Gustavo Cobreiro Suárez, former Rector of the University of Havana (Universidad de La Habana). The parties emphasized close and long-standing cooperation and discussed prospects for developing the relationship.

Congratulations To The 2019 Graduates!
From July 1 to July 9, 2019, MSLU held degree ceremonies for 1328 graduates, including 863 bachelors, 306 masters, 128 specialists, and 31 post-graduates across all its departments and institutes. Following the university tradition, the diplomas were presented by MSLU Rector, Irina Krayeva.

MSLU Rector Awarded the Order of "Unity"
MSLU Rector Irina A. Kraeva was awarded the Order of “Unity” that commemorates the 60th anniversary of the United Nations. She received the award on her birthday, July 8, from Mr. Amelchenko, Secretary General of the European Committee for Awards and Prizes and a member of the Writers' Union of Russia.